Fulham’s housing market has a rich history of unpredictability. Previously a relatively hushed market compared to its neighbours, activity soared during years of ever escalating property prices and made it a hive for buyers and sellers who sensed the opportunity.  Competition was so high that prospective buyers were at times told on viewings that they needed to make an offer then and there.

Now however Fulham is a very different scene. House sales have been falling even with regular price reductions and buyers are still waiting as this decline looks set to continue. The effect of this is that many properties have been waiting on the market for several months and even years in a few cases. Savills indicates that the prices of residential properties which are considered prime, have fallen by 4.6% in the last year and more than 14% in the last four years, whereas prices for London have increased by 19% overall. 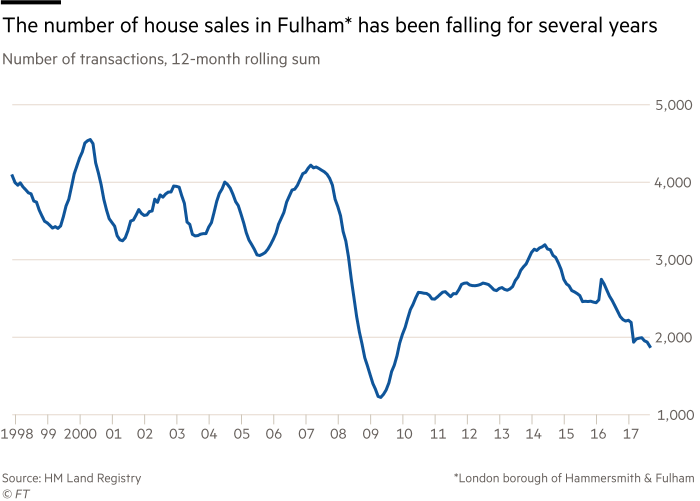 The Brexit uncertainty has further added fuel to the fire, largely because of Fulham’s allignment as an area for French expats due to the nearby Lycée Français Charles De Gaulle, and also due the community containing many financial services residents. The unknown surrounding the aftermath of Brexit has made a lot of people and expats in particular, hesitant to buy since they are unsure of what the situation will be. Some new developments have dropped 20% in price from just before the Brexit referendum to now. Furthermore, Strutt & Parker indicates that business has dropped 30% since the pre-Brexit peak and has not yet rebounded in the same way as after the 2008 financial crash.

The speculation moving forward is that there will be a period of remaining and remodeling for those that live in Fulham, rather than the traditional custom of selling and trading up. The opportunity that this scenario offers is an increased sense of community as residents stay longer in their homes by the reduced changeover. For those have been hoping to move to Fulham for some time, the reduction in prices looks to make this a more affordable opportunity than previously.

Selling in the current climate is tough, however, there is a better way – sell off-market with Invisible Homes. You don’t want to sit on a slow market and watch your property’s value diminish as prices fall and buyers lose interest.  You want to protect value and stand out rather than being just another listing on the open market. When you sell with Invisible Homes, you won’t get lost in the crowd but instead your property is new to every buyer. You lead your sale and what’s more you’ll always see the new buyers looking for a place like yours, keeping your home exclusive. Invisible Homes is the way forward for sellers and the solution to Fulham’s current housing market crisis.